The Aberdeen Standard Investments Scottish Open will return to the stunning Renaissance Club in 2020, following its success in 2019. Here at Fairways Scotland we are pleased to offer clients Scottish Open hospitality packages for 2020.

This years Scottish Open attracted over 66,000 golf fans which was the highest figure since the tournament began travelling to different venues after Loch Lomond hosted from 1996-2010.

The Tom Doak-designed course opened in 2008, and is the newest addition to the picturesque East Lothian coastline known as Scotland’s Golf Coast. Tom Doak created a world-class course, moving very little earth to showcase the natural features at Reniassance. Although not a traditional links, the course has a truly distinctive style; windswept and open dunes with trees coming into play. Since opening The Renaissance Club has quickly become established as a top golf course in Scotland, hosting the Final qualifying for 147th Open Championship and of course being the host venue for The Scottish Open 2 years running!

Skean Dhu Scottish Open Hospitality offers a balcony overlooking the par 3 15th green. This is the events feature hole and is therefore in a key location to enjoy the day, close to the practice range, 1st tee and 18th green. Hospitality includes: 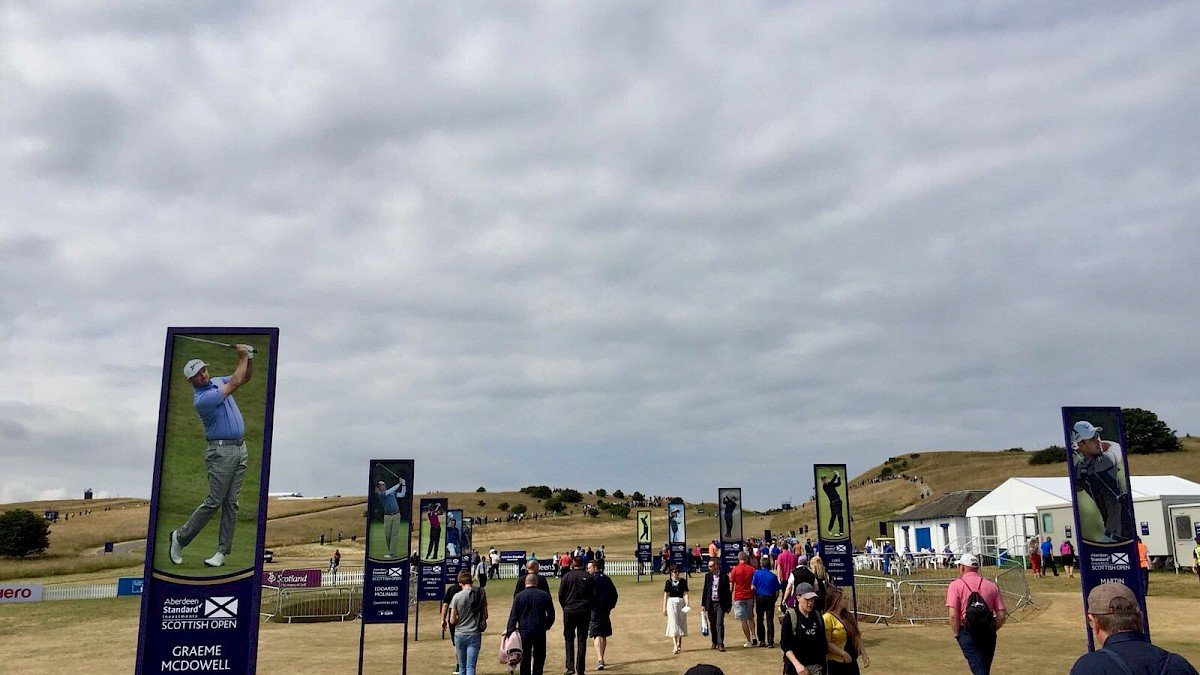 Some of the world’s best golfers descended down upon ‘Scotland’s Golf Coast’ at Gullane to compete in the 5th Rolex Series tournament of the season. Who would take home one of the most coveted titles on the European Tour Calendar, The Scottish Open?

This was the 2nd time Gullane Golf Club has hosted the Scottish Open. The first time was in 2015 and was won by USA’s Rickie Fowler. He once again took to the field this year as one of the strong favourites. Gullane offers a true test of links golf with undulating fairways, pot bunkers and subtle greens. Not to mention the fiery conditions on parched fairways caused by Scotland’s driest summer in over 30 years! With conditions playing firm causing the ball to roll out huge distances and ideal putting surfaces there was a sense that there could be a low round out there, so long as the wind didn’t kick up.

With Luke List and Rickie Fowler going low with opening rounds of 63 & 64 respectively we decided to take a trip to The Scottish Open ourselves to see how Gullane sets itself for tournament golf and its infrastructure… it didn’t disappoint. Only a 30-minute train journey from Edinburgh’s Waverley station to North Berwick, where we were shuttled 10 mins along the road to the course worked perfectly with minimal waiting. Upon entering the course, you are greeted by a passageway of bars, food outlets and activity tents until you reach the practice putting green and the 1st tee. Gullane is a great spectators course. Set on the side of Gullane Hill there are many great vantage points to watch some fantastic golf. You can also get close to the players to hear their conversations with caddies. Plus you can hear the epic noise from their ball striking!

We enjoyed following a few marquee groups including; Ian Poulter, Patrick Reid to name a few out to the furthest point of the course. The Englishmen started to make a charge up the leaderboard with Robert Rock, Eddie Pepperell and Tyrell Hatton Shooting 63’s and 64 respectively. Located at the far end of the course was the tented village – an impressive size compared to your regular tour event. There are lots of food options as well as bars, gin and champagne tents. And of course an enormous TV screen for you to enjoy the coverage of The Scottish Open whilst recharging over a cold refreshment. There are many activities for adults and children to enjoy too including; long drive challenges, putting competitions and coaching from PGA Professionals.

After a bite to eat we followed home Scotland’s very own Duncan Stewart who is attached to Turnhouse Golf Club. He shot an impressive round of 64. That set the tone for the rest of the day as the low scores continue. Finding ourselves the perfect vantage point behind the Par 3 17th green we stayed there until the conclusion of play. A fantastic day at The Scottish Open 2018!

The Curtain falls at The Scottish Open 2018….

The low scoring continued throughout Saturday and into Sunday at Gullane. With some rain and very little wind, the course was at the mercy of the pro’s. A young South African emerged from the pack as an unlikely winner. After carding 70, 64, 66 the previous 3 days Brandon Stone found himself over a 7-foot putt on the 18th green for the ‘holy grail’ in golf, a 59. Unfortunately, the putt slid by the left edge. However he becomes one of the elite few to join the ’60 scorers’ club in the history of The European Tour.

Bagging the Scottish title gets him a start in next week’s Open Championship at Carnoustie Golf Links. Also a cool £800’000 in winnings and has him knocking on the door of the top 100 in the Official World Golf Rankings. Not bad!!!

Special mention also goes out to the highest placed Scottish man Stephen Gallacher, who finished in 9th place. Also to Russell Knox and Turnhouse’s Duncan Stewart for finishing in the top half of the leaderboard.

Having played Gullane Golf Club’s courses many times in my life and also having attended many golf tournaments I was incredibly impressed the way the course was laid out for the players and the infrastructure for spectators. We are looking forward to next time already! 2019 sees the Aberdeen Investments Scottish Open move only a mile along the road to the stunning Renaissance Club. Renaissance Club is a special golf course, which I am sure will offer a similar test for the world’s best as well as a memorable experience for the spectators.

This week’s event sets the pro’s up nicely for next week when the golfing world turns to the 3rd golf Major of the year, The Open Championship taking place at the famous Carnoustie Golf Links in Angus. Carnoustie has been given its nickname of ‘Carnastie’ over the years due to it being arguably one of the toughest tests on The Open rota. Carnoustie Golf Links requires the player to have all the aspects of his game firing on all cylinders. The top ball strikers always rise to the top when The Open is at Carnoustie. Hitting Fairways, staying out of the bunkers and a sharp short game is the key around there.

My fancy to lift the Claret Jug on Sunday night is Tommy Fleetwood. Kerry-Ann is rooting for Sergio Garcia after he came so close the last time the event was held at Carnoustie in 2007. One things for sure it will be another awesome event!!!

If you are interested in attending any golf tournament events in Scotland including; The Scottish Open & Open Championship please contact us today.